The Municipal Department released Layout Regulatory Scheme (LRS) guidelines on Tuesday to bring all the unapproved layouts in Telangana into the fold of planned sustainable development.

The Government of Telangana announced new Layout Regularisation Scheme (LRS) to legalise open plot in unauthorised layouts of the state. The illegal layouts that have been developed and registered in the form of sale deed before 26 August 2020 can be regulated in respect of penalty payments. The last date for submission of LRS applications is 15 October 2020.

In its GO (No. 131 August 31, 2020), the Municipal Administration and urban development department (MA&UD) have specified that Telangana Regularization of Unapproved and Unlawful Layout Rule 2020 is to be enforced by Hyderabad Metropolitan Development Authority (HMDA), panchayats, other urban development authorities, municipal corporations, and municipalities.

The government has stated that owners of the property, private developers, companies, and property developers can regulate illegal land layouts if at least 10 percent of the land is sold in registered documents on or before 26 August. In all such illegal and unapproved layouts, no plots shall be registered and no buildings permit issued in such layouts in compliance with the relevant provisions.

No layout or development activities in the river or Nala ground, Full Tank Level (FTL) of all lakes, ponds, cheruvus, or kunta and in shikam lands would be regularised. Since water bodies and wetlands should be protected as the leisure or green buffer zone, there should be no other layout-development activity, just recreational use, within thirty metres of the river or 10-hectare lake boundary. The lake would be less than 10 hectares and 9 metres away and the river and vagu borders less than 9 metres away.

The government has confirmed that all municipalities and panchayats will have access to the LRS scheme. As per the GO, the applications may be submitted on-line for regularisation, in the specified format.

The government in its orders said that the LRS amount collected shall be kept in a separate escrow account and separate guidelines shall be issued by the Government on the utilization of LRS amount for the development of infrastructure in respective local bodies.

Hyd GHMC to get Rs 300 Crore Collection from New LRS 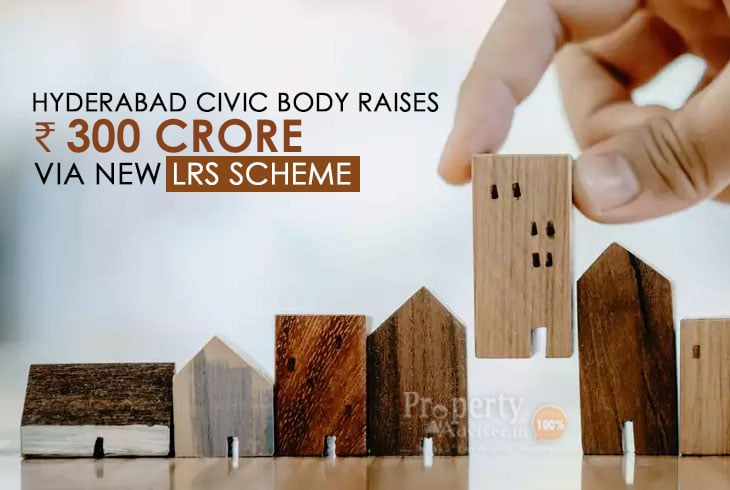 The Greater Hyderabad Municipal Corporation (GHMC) expects Rs 300 crore in its coffers with the issuance of its latest notification for Layout Regularization Scheme (LRS). An evaluation has been done, and it is expected to receive 50,000 LRS applications under GHMC limits. Of 85313 pending applications for the LRS, 30092 were issued, 21300 were rejected, and 28,306 applicants did not submit all documents. The rest did not pay the required fee.

GHMC officials stated that only layouts for which procedures were approved (30,000) were eligible for registration as per the latest memo released by the Registration and Stamps Department. The declined applications are those where the parcel of land falls into full tank level (FTL) of lakes, buffer zones and stormwater drains.

According to GHMC reports, despite reminders some candidates whose requests were held pending because they did not submit documents. The instructions were given to the applicants and briefed about the list of documents they needed to present, but they did not produce them. Before 15 October, the applicants could submit the pending documents online.

Officials of GHMC stated that Unlike previous, this time due to  Covid-19 norms  LRS melas would not be conducted.

On Monday, 7th Sep 2020 the state government launched the online website and services of LRS through the 'Meeseva'. Regularizing plots and layouts can help legitimize the land, making it easier to issue permits and registrations. Government has informed Telangana's people to use the new Layout Regularisation Scheme (LRS) to regularise their illegally developed plots and unauthorized layouts.

However, only the layouts and plots with registered sale deed or title deed existing as on August 26, 2020, will be considered for regularisation on payment of prescribed charges. For regularisation of the plots, the applicants should submit their applications through online or at Mee-Seva centres in prescribed format along with related documents before October 15. They should also pay a registration fee of Rs 1,000 in case of individuals and Rs 10,000 in case of layout developers.

Furthermore, in order to regularise illegal formats, the authorities concerned were ordered to strictly adhere to existing norms.

The government provided helpline numbers to contact for resolving doubts on plotted projects they include for plots under HMDA 1800 - 4258838 and for plots under GHMC Limits is 040- 21111111. Officers will be available from 10 am to 6 pm.

The new LRS guidelines would reduce unapproved and illegal layouts in the state of Telangana and help to boost the real estate sector.

Hyderabad Civic Body to Keep a Check on Illegal Constructions

The Greater Hyderabad Municipal Corporation (GHMC) has established a Special Task Force (STF) to regulate unabated unapproved buildings in the city to inspect and initiate action on all ongoing constructions, including demolition. The STF has the power to seal the construction of illegal structures.  The task force will have outsourced engineers from the National Construction Academy (NAC), who will regularly inspect buildings and submit an STF-level report. Town planning officers are not included in the inspections.  GHMC Special Task Force on Illegal Structures  A recent note on constituting the STF and directives has been released by GHMC Commissioner DS Lokesh Kumar. Official sources have said that the TS-bPASS Act 2020 provides for the establishment of special teams to curb unauthorized structures. Telangana State building permits approval and self-certification system.  In the first few phases, the STF will stop and demolish illegal constructions if the owners do not accept permission or violate construction rules. The zonal level is being trained in the inspection process and in writing panchanamas for special team members, in particular, engineers.   The STF zonal level is led by a zonal commissioner of the respective zones and the zone superintendent and DCP (Law and order) members, as well as the nodal officer of a GHMC joint commissioner or deputy commissioner, whose names are served on owners of illegal buildings.   The GHMC Commissioner has indicated that at least once in 15 days from the construction phase of the NAC, engineers were appointed for periodic inspections and that he was sending reports to the zonal-level nodal officer for action. By: Shailaja K

Disclaimer: The project details and other content available on this website are for information purpose only. Our professional team personally visits the project every month to give up-to-date and accurate data to our viewers/buyers. Nothing contained in the projects should be analysed as legal advice, investment advice, advertisements, and as a promotion of any project or developer. The viewers/buyers are advised to visit the relevant RERA website before taking any decision on the basis of information displayed on the website.